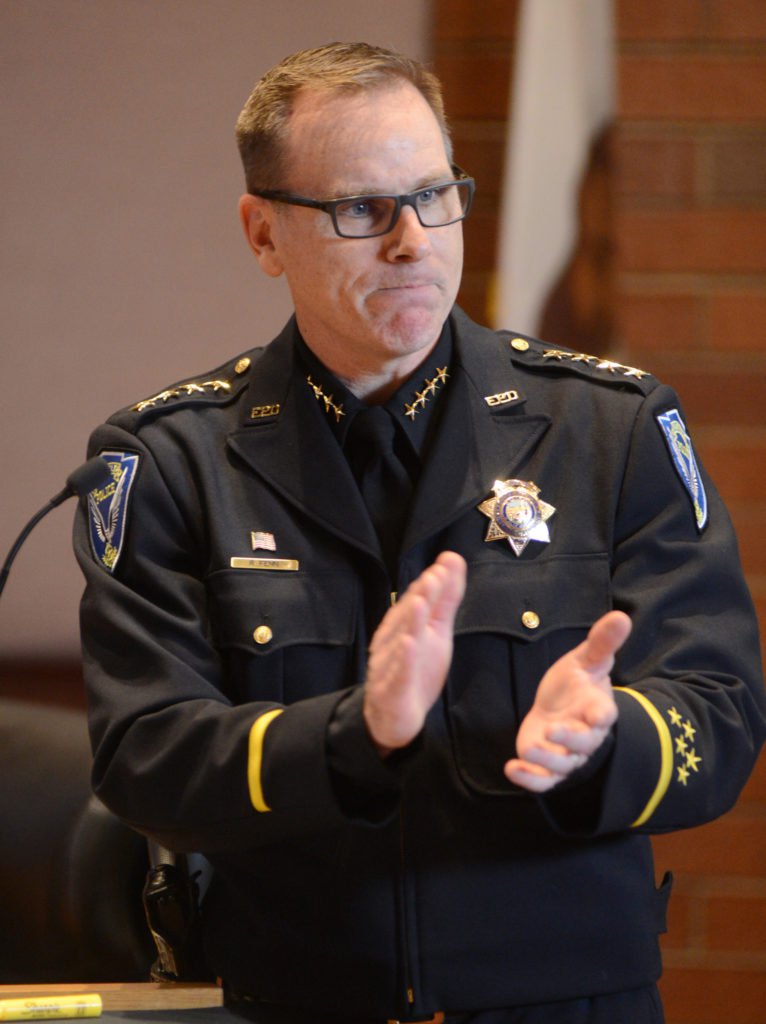 “He has earned the respect of many,” Price said Thursday. “He instills confidence.”

Price spoke about a 2016 meeting at St. Mark’s Lutheran Church in Fairfield where Fenn answered questions from the community.

“He has remarkable listening skills,” the mayor said. “He takes it all in.”

Vice Mayor Chuck Timm, who served 31 years in the Fairfield Police Department before retiring, said Fenn has support of the department.

“They wanted him to be picked,” Timm said. “The department’s pretty happy. I know that.”

“He has the confidence of the community and the people who work for him,” the vice mayor said of Fenn.

Councilwoman Pam Bertani said Fenn, who has been serving as interim chief since the March retirement of Chief Joe Allio, deserves the appointment.

“He’s demonstrated his ability to handle the job,” Bertani said. “Randy will make a fine chief of police.”

Councilman Rick Vaccaro said Allio was a great chief and a great person.

“I know Randy will be the same way,” Vaccaro said. “It was a wonderful choice.”

Fenn is on vacation and could not be reached for comment Thursday.

In a press release Thursday from the city, he said “I look forward to continuing to work with the women and men of Fairfield Police Department and build on our reputation for partnering with our community to address public safety and quality of life issues.”

“It is especially gratifying for me to serve in the place where my family and I call home,” said Fenn.

He has more than 25 years of law enforcement experience began with the Fairfield Police Department in 2012 as a lieutenant, after serving with departments in Concord and Truckee, the press release said.

Fenn, who has a bachelor’s degree in Human Relations and a Master of Science in Criminal Justice, was promoted to captain in 2014..

The selection follows City Council approval in March of a $32,500 contract with a consultant in Placer County to assist the city in recruiting a new police chief. Ralph Andersen & Associates in Rocklin completed chief of police recruitments for San Francisco and Oakland.

Bertani said Thursday that the recruitment contract was worth the cost.

“This a big job,” she said of police chief. “We have to get it right.”

Not to undertake a recruitment would have been irresponsible, the councilwoman said.

City Manager White said in a press release Thursday that, “We conducted a nationwide search to find the best person to lead our police department forward, and to Fairfield’s great fortune the top candidate comes from within our ranks.”

An agreement with Fenn that goes before the City Council at its meeting Tuesday includes a provision that the police chief is an “at-will” employee of the city.

“The city manager may remove Fenn from his position at any time, with or without cause,” according to provision.

Councilwoman Catherine Moy could not be reached Thursday for comment about the new police chief.

Then-chief Allio had said in March that his retirement meant he wouldn’t play a role in who succeeds him, but Allio praised interim chief Fenn.

“He’ll be better at the job than I’ve been,” Allio had said.

Reach Ryan McCarthy at 427-6935 or rmccarthy@dailyrepublic.net.